Friction Labs Chalk Review – Is It Worth It?

For a long time climbing chalk was pretty bog standard and came in the same blocks used by powerlifters and gymnasts. These days there are a range of brands to choose from – with Friction Labs making the biggest claims of increased performance.

When Friction Labs came onto the scene a few years back, the biggest difference most people could see immediately was the price. At about three times the price of a standard bag of chalk, Friction Labs is still much more expensive than most others.

Many pros now use it regularly, and you might already have a climbing bud that swears by it as their secret sauce. We spent a few months testing it up against other brands to see if it’s worth the hype.

Why Use Chalk Anyway?

Climbers use chalk to absorb sweat. We sweat through the pores on our fingers, and this moisture detracts from the friction needed to hold on while climbing. Lightly dusting your hands allows the chalk to absorb the sweat, leading to better friction. Not everyone sweats and some sweat more than others so chalk isn’t always necessary but can help a lot of people.

Sometimes holds themselves – especially outdoors – can already have moisture on them from rain, seepage through a cliff face, or high humidity. Chalk is helpful in these situations to absorb water already on a hold. However, too much chalk (or bad quality chalk) can lead to slimy feeling holds, or holds where all of the microscopic texture is filled in. Which is why we also use climbing brushes.

How Is Friction Labs Different?

The thing that Friction Labs claims makes the difference is the purity of the powder. All climbing chalk is a powdered form of Magnesium Carbonate, most of which is mined as the mineral Magnesite in China. They claim that most other chalk brands have a lot of Calcium Carbonate – a byproduct that isn’t good at absorbing moisture.

Their product is meant to be lab grade, meaning better moisture wicking and less slimy chalk hands that do the opposite of giving grip. This should also have the effect of needing to chalk up less, saving wasted chalk. They also claim that other brands use a drying agent – which is true, but also drying is what chalk is meant to do.

In our testing of different brands and chalks, this seems to be the biggest change between cheaper and more expensive brands. It also makes the biggest difference in performance. What it feels like is that the finer chalk of Friction Labs gets into the ridges of the fingers better and gives a better coating.

It’s fairly easy to see the difference between it and a cheaper brand, as well as being easy to actually chalk onto fingers without lots of dipping. If you like to dip and go without crunching or extra work the “Unicorn Dust” fine powder is amazing at getting a full coating fast.

The other chunkier forms are great for a longer lasting coating. When you crush the chunks between your fingers it tends to get pushed into the crevices of your fingerprints better. Even small chunks work really well and do break down to powder without much work.

Have you ever chalked up after sliding off of a sweaty route, then found the friction you get hasn’t improved at all – or even got worse? There are certain cheap brands we’ve found that almost don’t do the job they’re meant to.

Sometimes too much chalk with a lot of moisture builds up to a “goopy” feeling on the hands. It normally happens with cheaper chalk where you feel like you have to constantly chalk up, meaning lots of the product on your hands. This can reduce friction by leaving a useless layer of damp chalk on your hands.

We haven’t had these problems with Friction Labs. When we chalk up, just a thin coating is great at getting damp hands dry quickly. It also keeps your hands dry for longer than we’ve found with some other brands. It’s noticeable – though not leaps and bounds over some others.

Using less chalk is a big boon too. We’ve found in the past that we’ve needed to wipe of excess chalk then re-chalk to get the good friction, but with Friction Labs we haven’t found this issue. That means less chalk on your fingers so less “goop” in between your fingers and the rock/plastic.

Probably our favorite thing about Friction Labs is that it lasts much better than other brands. We probably chalk up about half as much as we used to as well as needing less each time to get a good coating. On long routes this makes a big difference as we don’t need to stop and re-chalk every few holds.

It also leads to less chalk being lost to the air every time your chalk up, and less faffing about after every single attempt at a boulder.

Having talked a lot about the pros, lets get into the negative points. The first is obvious – the price. Chalk can be bought super cheap, especially in bulk. Friction Labs is generally three times the price of the budget brands, and at least double most others. You might use less, but it’s still a steep cost.

If your standard brand works for you with any problems – is is really worth the bump up? We’re also frustrated that the packaging is still not recyclable or compostable. Other brands have got much better at this though change in the industry is still slow. It’s a shame that after using this chalk, the packaging will end up in a hole in the ground somewhere forever.

Overall this chalk is probably the best chalk we’ve tried in the past couple of years. We’ve used it for a few months as well as doing some side by side testing with other chalk and climbers. Personally we like this the most.

It works exactly how you’d want a good chalk to function. The coverage it gives is great, it doesn’t get slimy, and it lasts well. It does need less application to work but whether it’s worth the extra cost is up to you.

Too Long; Didn’t Read: Friction Labs chalk really is great. If you can afford it go for it, if not just avoid the cheapest brands and basic blocks and you’ll probably be fine.

Which One Should I Get? Unicorn Dust Vs Gorilla Grip vs Bam Bam

If you want to you can buy small 1oz tester packs of all three and figure out which you’d prefer.

The different consistencies all break down into the same chalk, it’s mainly a matter of personal preference for what size you like. Even the chunkier ones come with a lot of loose chalk and break down into powder after getting bashed around in a chalk bag.

The finest of the Friction Labs chalk “Unicorn Dust” is incredibly easy to get a good coating with just a little dip. It’s great for sport climbing where each second wasted is another second of building up pump. The coating doesn’t last quite as long as the crunchier versions.

We like the “Gorilla Grip” which is the standard small chunks, which requires just a little crunch but tends to stay on a little longer as you push it into the . The super chunky “Bam Bam” doesn’t feel like it performs differently, just that it needs a bit more breaking down. All three do a better job of coating than the standard cheap chalk.

Personally we don’t use a lot of chalk so a standard bag of Friction Labs lasts pretty well – but if there’s a decent mid-range chalk available when we need it, that’ll do too. For our chalking set up we use a refillable chalk ball as well as bit of loose chalk in the bag.

You can buy a pre-filled refillable chalk ball from Friction Labs that uses their Unicorn Dust chalk for $10 at REI. It’s a decent deal and you can refill using whatever chalk you’d like after.

When we first chalk up we use the loose chalk for most of our palm surface, then reapply as needed to the fingers by squeezing the ball. This saves chalk being wasted and getting into the air. If you have to work in a climbing gym all day, the air feels much cleaner when people don’t use loose chalk. Plus it’s way easier to hoover.

We’ve done a full article on the best liquid climbing chalk brands out there. The Friction Labs Secret Stuff came out on top and we really like liquid chalk as an alternative to powdered stuff. Chances are a friend or friendly climber at your local gym has some and wouldn’t mind you trying a squirt of theirs out.

Some claim that liquid chalk with alcohol kills germs and possibly SARS-CoV-2 / Covid. However whether liquid chalk is antibacterial is something that hasn’t been confirmed, we go in to more depth in our article – Is Liquid Chalk Antibacterial?

Upsalite is a scientifically engineered form of climbing chalk (Magnesium Carbonate) that is significantly more porous that standard chalk. It apparently absorbs 10 times the amount of moisture that normal chalk does. Black Diamond sell it in either small packets that you add to your normal chalk as a Pure Gold booster, or in 10% upsalite 90% standard form as Black Gold.

It’s even more expensive than Friction Labs so that’s a big ask for chalk. We haven’t had a chance to review it yet but are planning to do a full round up of a bunch of brands in a big test. Just as soon as multiple people touching the same thing over and over is safe again.

This stuff is mined in France and prepared in the UK – so if you’re in Europe it’s likely less air miles than Chinese mined, American produced stuff. Seven Sisters chalk is ultrafine, meaning it’s a very fine powder that’s easy to apply with a single dab. It comes with good recommendations and is about half the price of Friction Labs in Europe.

Tokyo Powder is another high end brand that claims to be the “best climbing chalk in the world”. Their base product is the “Black” bag. They advise to use a pinch from their smaller “Boost” pack which you rub in first, then chalk up as normal.

Rosin is a pine tree sap, called “pof” in France where is used to be popular to carry a weird little sock thing full of it. It’s sticky and was used on hands on shoes to give more friction and literally stick to the rock. It’s also bad for rock because it doesn’t wash off and turns into a hard glassy surface.

Basically it works great for the first time climb but after that it eventually makes the climb worse. We’ve written a little bit about avoiding liquid chalk with rosin before. 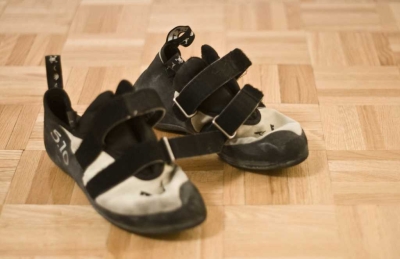